I must admit that Eugene Peterson is quickly becoming one of my favorite characters when it comes to the discussion of pastoral life and sabbath.  Here is an excerpt from an interview Eugene recently did with Gabe Lyons:

"Gabe:
What should a Sabbath look like in my life? What does it look like in yours?
Eugene:
A day of unplugging. That's a good way to put it. When I was a pastor, the Sabbath was on Monday, because Sunday was a workday for me. My wife and I didn't practice Sabbath when we had small children, because it took us a few years to figure out our rhythm.
But typically on a Monday, we would pack a lunch, and we would go to the woods. We'd hike for three or four hours in silence. Then we prayed, had lunch, talked, and worked our way back home.
We'd get home by the time the kids were home. Interesting, they loved this. We weren't uptight about anything because it was the Lord's Day. We played and we prayed and didn't do anything that wasn't necessary. Unplugged everything, basically.
It transformed our lives, our family life, our personal lives, and our congregational life. Not everybody did it, but they saw us doing it. Somehow that gave them a sense that they don't have to do what the world's telling them to do. It really does take effort and determination. Those of us who want to keep the Sabbath are going to have to be pretty intentional about it. I've been doing this for at least 40 years consistently, and I've had dozens of students and parishioners who have also adopted this practice. Most of us find it's the most radical thing we've ever done-and the most creative."
I want to highlight two things that I gained from this excerpt. 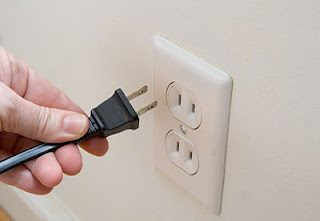 First, I love the imagery of Sabbath as unplugging. As I blog I can see at the least 10 different cords or cables that are "plugged into" something. Imagine for a day that I simply unplugged all of those things and let them rest and be. The aesthetics of my office would be impacted very positively. Think about the simplicity of all of those items being "unplugged".  Not only do I have cords strewn about, but my calendar is open just one tab over from my blogger tab. I simply have to glance at the colorful Google calendar to see all that I, personally, am "plugged into".  Again, imagine if only for a brief period I "unplugged". If I unplugged from the role of professor, the role of campus minister, the role of landlord, the role of _________. If I only unplugged and simply existed as Eli, as a child of God in need of his presence, guidance, and Fatherly ways. Sabbath as "unplugging", I think Eugene is on to something.
Second, Eugene mentions his own personal Sabbath practice when he had children that were school aged. As many of you know I am the father of 2 month old twin boys. Needless to say I can't for the life of me figure out what Sabbath, "unplugging" looks like in the midst of keeping up with Ian and Nolan. I am constantly plugging a bottle in one of their mouths to satisfy their appetite. Eugene and his wife Sabbath together without the kids. They bring the kids in on the Sabbath practice later, but they intentionally share this time together. They unplug together, then they can stay unplugged with their children later in the day. That seems to make the idea of Sabbath with small children or children in general far less daunting.  And the effect of this practice was revolutionary for the family, it "...gave them a sense that they don't have to do what the world's telling them to do." No, they are free to do what God tells them to do.
Posted by Eli at 1:23 PM