Sabbath - Reconsidered because of Terror


The Sabbath is to be characterized by rest and redemption – but it did not feel like that for me today. In fact, if anything, the Sabbath today felt like an experience of strife, slavery, suffering and trauma. 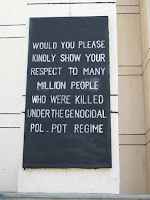 As part of a program in peace and conflict transformation I am engaging in Southeast Asia, I visited two locations today that memorialize the incarceration, torture, and genocidal campaign of the rule of the Khmer Rouge in Cambodia – from 1975 to 1979. Estimates are that more than 2.5 million persons were killed in these few years – by direct violence or intentional starvation. As the established Communist government attempted to consolidate their claims, they ruthlessly sought out and punished any possible or (mis)perceived threats, resulting in torturous prisons established throughout the land. Today, the Choeung Ek Genocidal Centre and the Tuol Sleng Genocidal Museum memorialize two places in and near PHNOM PENH, Cambodia where torture, death, and mass burials took place.

I visited these places today. The Choeng Ek Genocidal Centre is better known as “the killing fields” – and I stood for several minutes in front of the Stupor – a SE Asian Memorial stone, like a Western “Head Stone” – but larger and different. This particular stupor was perhaps 60 feet tall – and perhaps 20 feet square. Inside the stupor, encased in a glass cairn some 8 feet square, were the skulls of those who had been buried here. Starting at the ground level and on rows of shelves that ascended to the top of the structure – the eye-sockets of 40, 50, perhaps 60 skulls peered out from each shelf. Thousands of empty eye sockets peered out to those who came to “visit” this place. We walked among the fields where they had been buried. With each season of new rainstorms, new effects of erosion result in new fragments of bones appearing from the earth.

We know that more than 17,000 persons passed through the 21st Security Prison to be established, more famously known as Tuol Sleng. This prison, though, was less about incarceration, than it was about torture. Under horrendous conditions, of those who passed through this prison, no one escaped alive. All who were incarcerated here, except seven, died. Those seven who survived, only survived because they were useful to the prison guards, redeemed when the Vietnamese liberated Phnom Penh. Of the seven who survived, only three remain alive today. I sat for a time with one of those three. He autographed his biography for me and I brought it back to my hotel room, where I sat to read it later this same day. 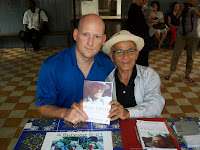 Sabbath is supposed to be about rest. Today’s Sabbath reminded me of the toils of human persons, trials, tribulation, and terror.